Could a single breed of dog evoke enough of a tough, tenacious spirit to become the mascot for Yale University, the U.S. Marine Corps, and the whole nation of England? Yes! That breed, of course, is the bulldog. ( See also, French Bulldogs)

Occasionally referred to as an English or British bulldog, the breed arose from a bloody history in England. The breed can be traced all the way back to fighting mastiffs brought to the country by the Romans. These dogs were used for entertainment purposes by participating in bull-baiting. The good news for lovers of the modern bulldog is that all the ferocity of the fighting dog has been bred out over the centuries. Though they still look tough, when it comes to disposition it’s hard to imagine a more loving and faithful pet.

Bulldogs enjoy one of the world’s most distinctive breed appearances, and they are practically impossible to mistake for other breeds. They are medium sized, low-slung, and thick through the body. They have massive, square heads with short muzzles. Legs are sturdy and short and their chests and shoulders are broad.

While Bulldogs are not tall dogs, they are amply muscled. They have expansive cheeks stretching all the way to the sides of their eyes. Bulldogs should have dense, wrinkled skin on their foreheads. The breed’s upper lip droops and the lower jaw is undershot. This means that the lower teeth project past the upper teeth. The jaws themselves are heavy and strongly muscled, a legacy of the breed’s fighting heritage.

The eyes of the bulldog are dark and round. The breed carries a short tail low down on the dog’s hindquarters. Ears are small and thin and typically folded in roseate curls.

The extensive musculature of the bulldog produces a gait as distinctive as the breed’s appearance. The squared-off proportions of the bulldog render his usual forward motion more of a waddle than a walk. Many bulldogs could be said to walk almost crabwise, shuffling from side to side as they make forward progress.

The breed’s extreme proportions, tending toward wide heads and narrow hips, lead to puppy-whelping problems for female bulldogs. Today most purebred dogs are delivered by cesarean section, making the raising of the dogs an expensive undertaking. 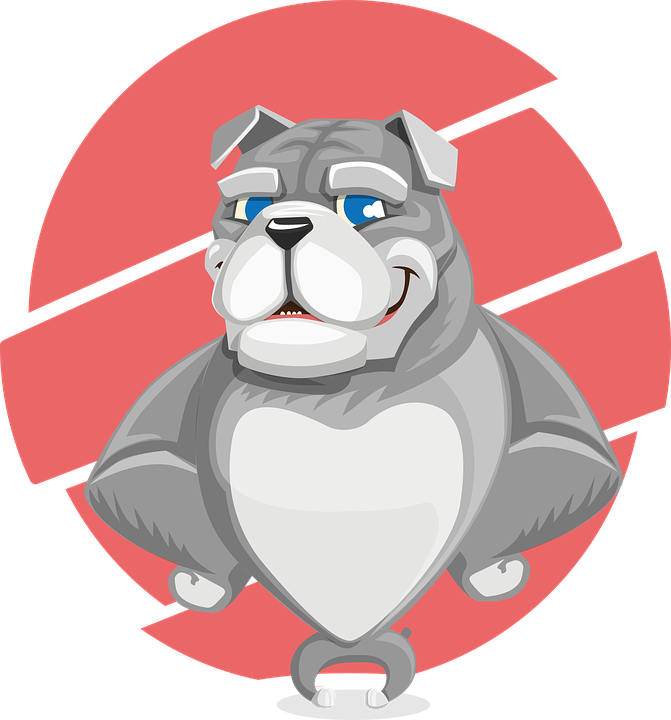 Though bulldogs are sometimes portrayed with ferocity in cartoons and other simple media, modern examples of the breed are notable for kindness and affection. While modern dogs retain the courage and bravery of their forebears, they also have a calm and dignified demeanor, rarely picking fights with other dogs. Fully-grown, they are protective and can be stubborn when they feel uncomfortable. When surrounded by trusted family members, they are friendly and playful. This breed forms strong bonds of trust with the people in their lives, and they will tend to stay close to their masters whenever possible.

As touched on above, the bulldog’s extreme proportions do lead to some health challenges throughout the dogs’ lives. They tend to have more joint and respiratory problems than other breeds. Bulldogs are especially prone to obesity if they’re not exercised enough, and carrying excess weight tends to aggravate their other health problems.

Though bulldogs remain consistently popular in the U.S., they’re not necessarily suited to every pet owner. They are surprisingly heavy for their size, and fully-grown examples can be too much for weaker owners to lift and handle. When kept indoors, they tend to become lethargic, sleeping frequently between feedings. While they love children, they’re not inclined to burning off too much energy in endless outdoor play. They’ll be happy to fetch a ball a few times and engage in a little running, but bulldogs will gravitate back to their master’s side and curl up to watch the world go by.

This breed is well-suited to a sedentary indoor life. They do need a daily walk to keep from gaining weight. Bulldogs are suited by temperament to a relaxed lifestyle. The breed tends to favor brief play-sessions; most are ready for a nap after about 15 minutes of activity. Their low energy levels make them capable of adapting to a wide variety of homes and family lifestyles. A bulldog can handle an extended walk – up to one or two miles – during the coolest part of the day, but when pressed for time bulldogs will be perfectly content with shorter strolls.

The compressed snout of the bulldog can cause respiratory distress during extremely hot or cold weather. The breed is not well-equipped for dissipating excess heat, and bulldogs are particularly vulnerable to sunstroke. When temperatures exceed 85 degrees, this breed can succumb to fatal heatstroke in just a half an hour. They are best kept in an air-conditioned environment (with easy access to plenty of water) during the summer months.

Bulldogs make poor swimmers due to their unbalanced anatomy. Their heavy heads will drag them straight to the bottom if they fall into open water. You must keep your bulldog well away from pools, spas, and other drowning hazards.

While bulldogs are not the best breed for obedience trials, they have exceptional memories. They are best trained with short, fun sessions that concentrate on repetition and affectionate rewards.

The right amount of food for your bulldog depends on size, age, metabolism, and activity level. Dogs are just like people, and different individuals will develop different nutritional requirements, even within a single breed. Bulldogs are likely to do well with lower amounts of food due to their low energy levels, but an exceptionally active bulldog will need to eat more. Note that food quality matters; better dog food is more densely-packed with nutrients and your dog will need less of it.

Bulldogs are very easy to overfeed, but you need to avoid this possibility if at all possible. The extra stress that obesity subjects a bulldog’s joints to can cause serious health complications. You should definitely restrict your adult bulldog’s food intake to two measured meals a day; do not leave freely-available food out on a constant basis.

You can check your bulldog’s weight level with the “hands-on” test. Grip your dog firmly around the chest with your thumbs in line with his spine. You should be able to feel the dog’s ribs without squeezing. (A healthy bulldog’s ribs will not be visible to the eye, though.) If you can’t feel your bulldog’s ribs, it’s time to up his exercise and cut down on his meals.